Focus on the internet threats that matter, and ignore the ones that don’t

Protect government data and bolster agency security with GreyNoise
45%
of all infection vectors in 2021 were categorized as
mass exploitation
.
IBM X-Force

Internet noise consists of scans and attacks from thousands of unique IP addresses per day, resulting in thousands of events for security teams to analyze. At best, internet noise is distracting, and at worst, malicious.

At GreyNoise, we’ve found that internet noise is responsible for 38% of security alerts seen by our customers and prospects on average, generating a tremendous volume of false positives and low-fidelity alerts that cost SOC teams time and productivity.

At the same time, internet-based attacks (a component of internet noise) are putting even more pressure on security teams with internet-based attacks surpassing phishing to take the #1 attack vector position globally. Today, companies have less time than ever to respond as they scramble to defend against mass exploitation attacks like Log4j.

GreyNoise is helping the DoD’s Defense Innovation Unit (DIU) identify and understand internet-wide scan and attack activity. This $30 million production contract will allow the GreyNoise platform to be purchased and utilized by all DoD organizations over a 5 year period.

"GreyNoise will enhance cyber threat detection and intelligence-gathering capabilities across the DoD and other branches of the US government, and enable security analysts to focus their valuable time and energy on legitimate threats."
— ANDREW MORRIS, FOUNDER AND CEO, GREYNOISE INTELLIGENCE

GreyNoise is trusted by the DoD, Civilian agencies, Fortune 500 enterprises, top security vendors and thousands of threat researchers. GreyNoise collects, analyzes and labels data on noisy IP addresses that scan and attack the entire internet, saturating security teams with alerts. We have thousands of sensors collecting scan & attack traffic with sophisticated tagging of data and we are built for scale with billions of events per day being processed.

Automate workflows and prioritize incident response in your SOAR

Filter out false positives in your TIP or threat intelligence repository 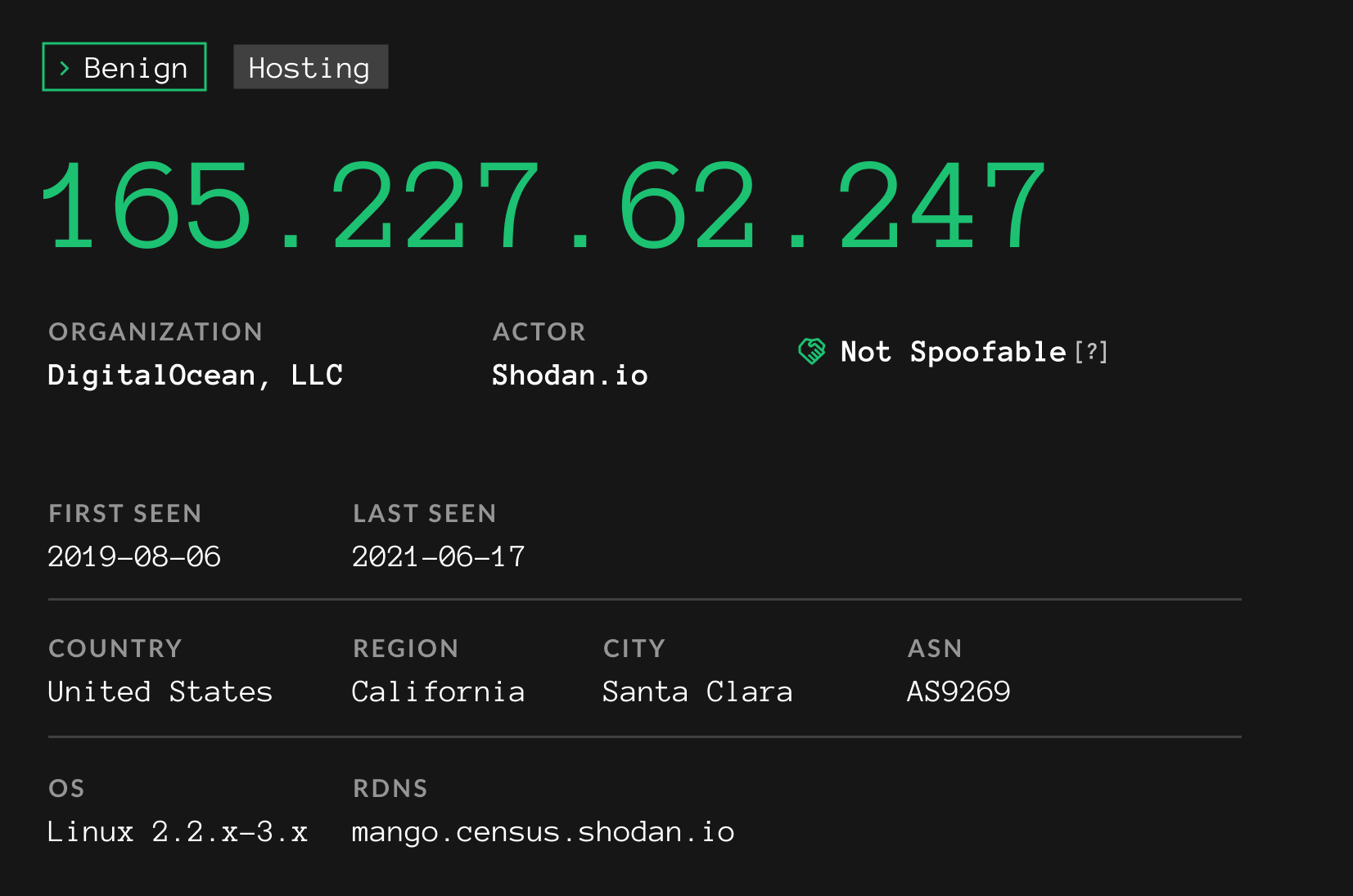 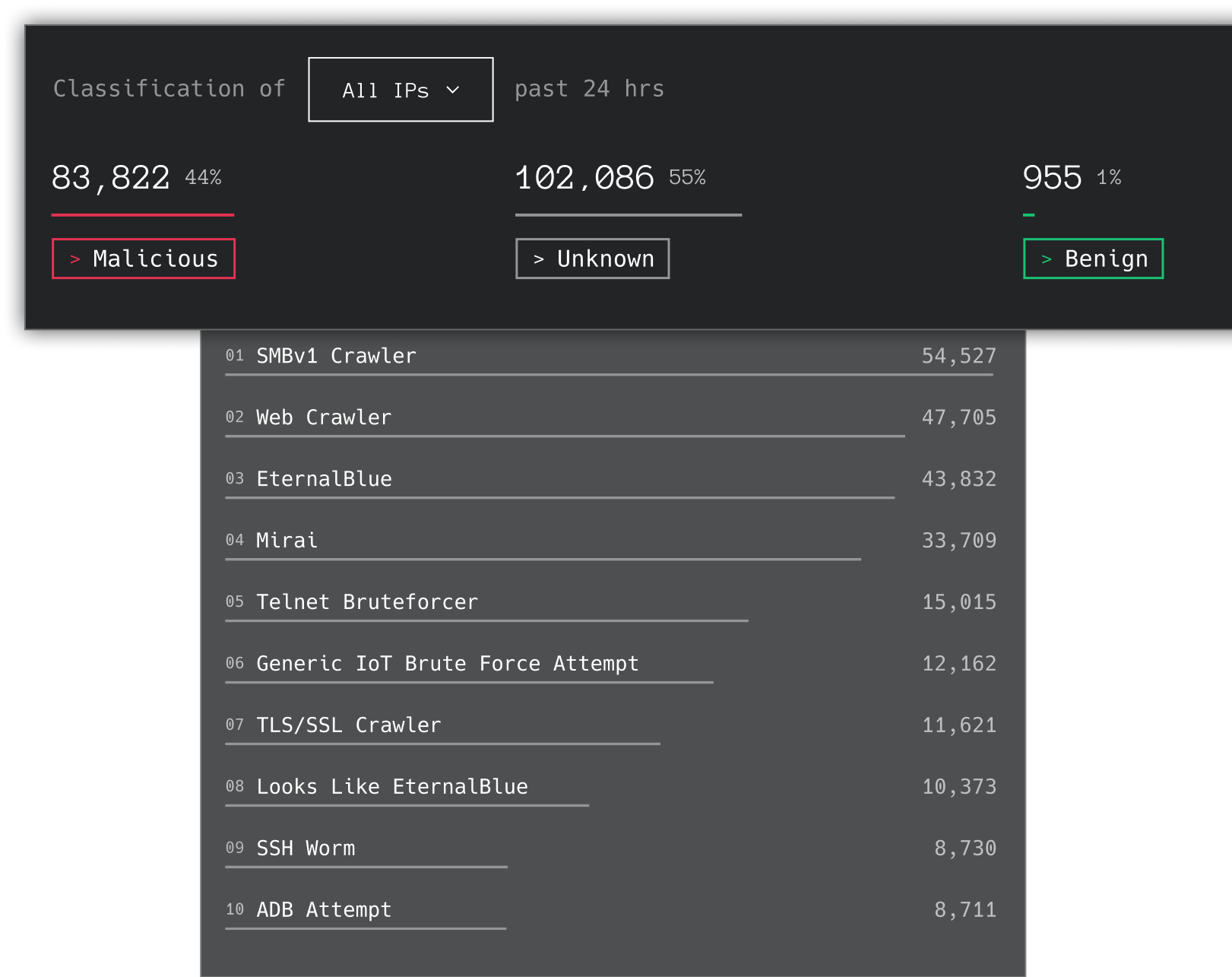 Lookup an IP to understand whether it is malicious or benign

Get detailed context on IP behavior and intent

Quickly identify and respond to emerging threats with GreyNoise Investigate

Triage alerts based on malicious, benign, or targeted classifications

Identify IPs of non-scanners that might be targeted attacks 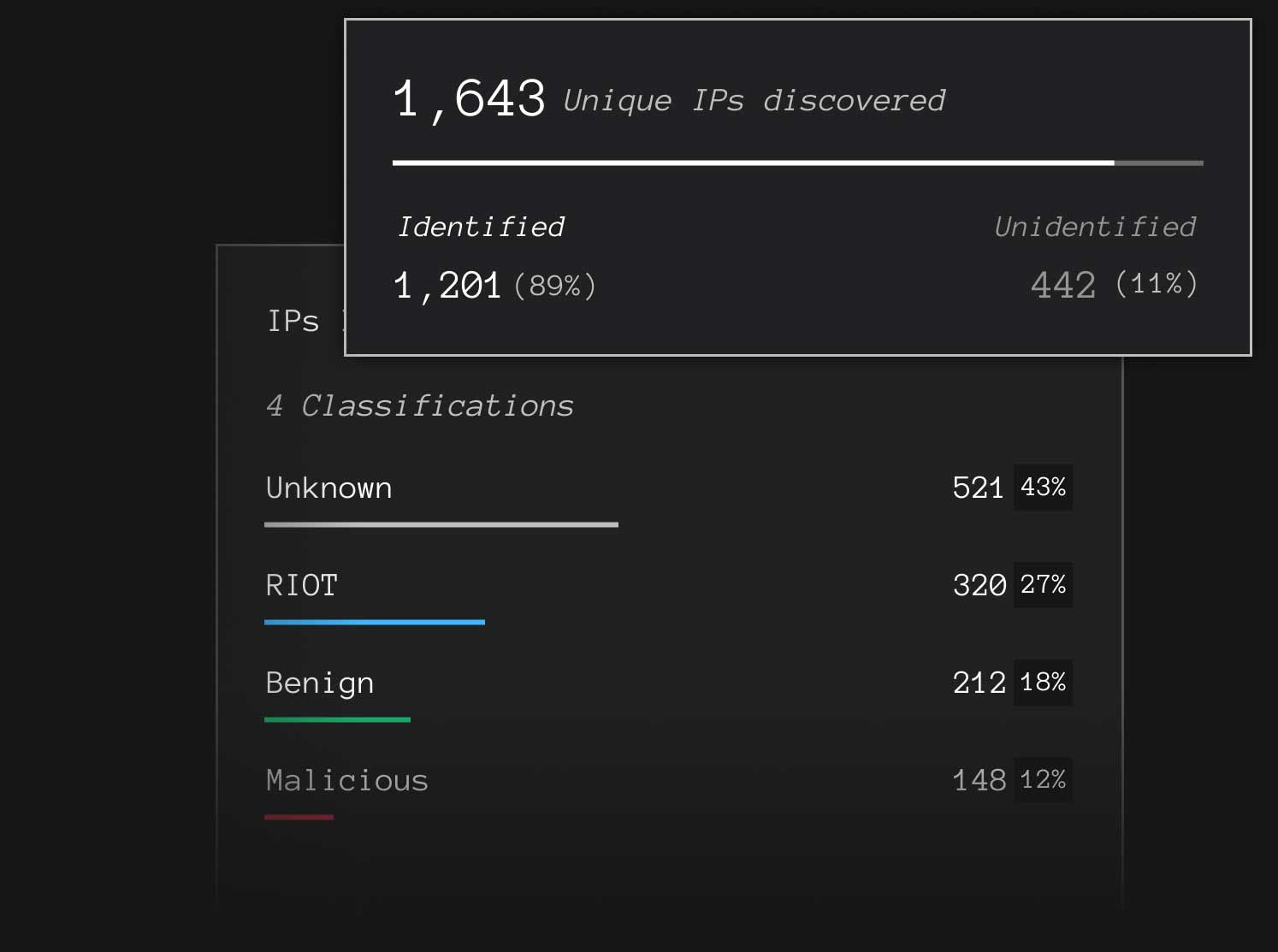 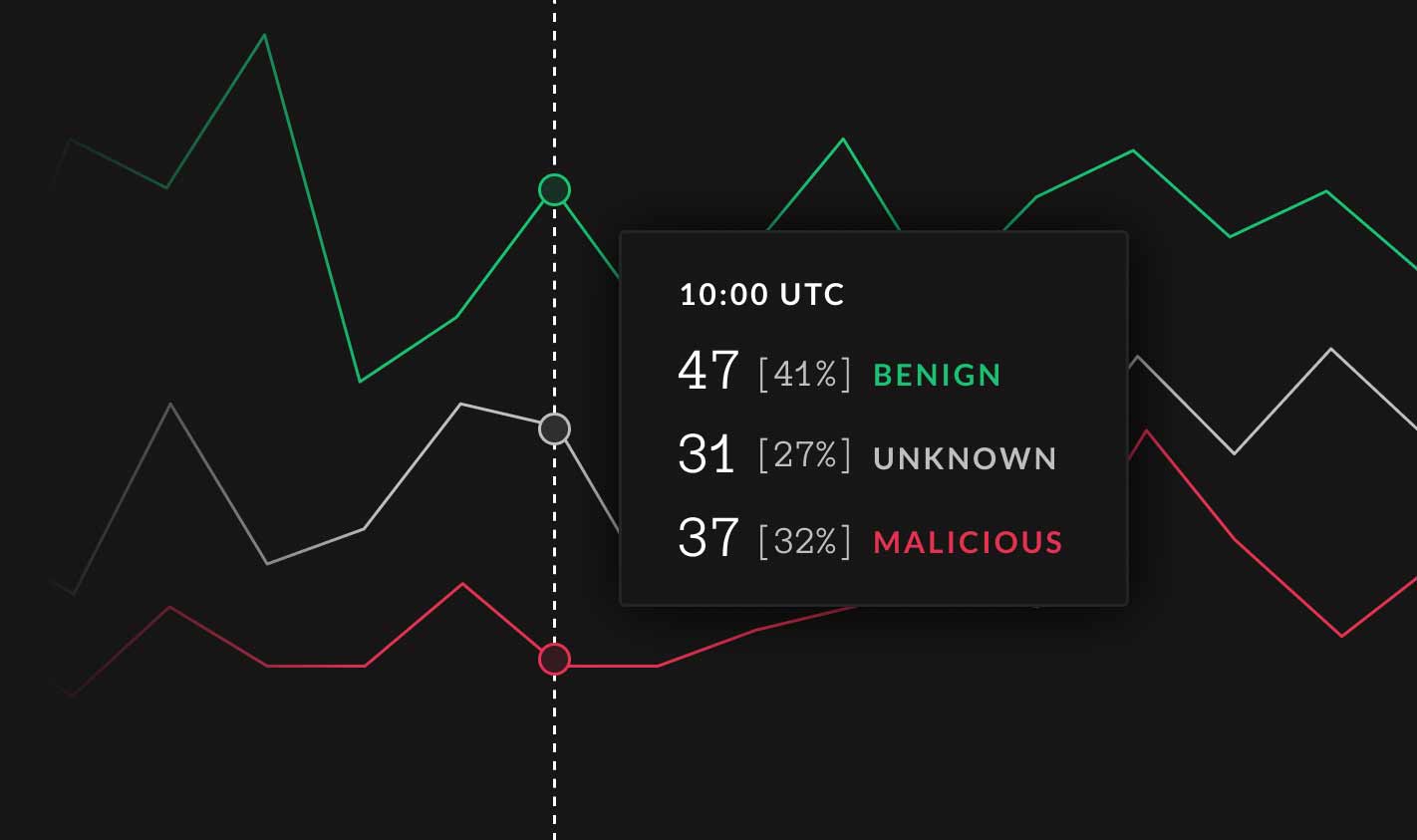 Classify IPs scanning for a vulnerability based on intent (benign vs. malicious)

View scan and attack activity for a vulnerability over time

Block scanners at your perimeter to stop further compromises 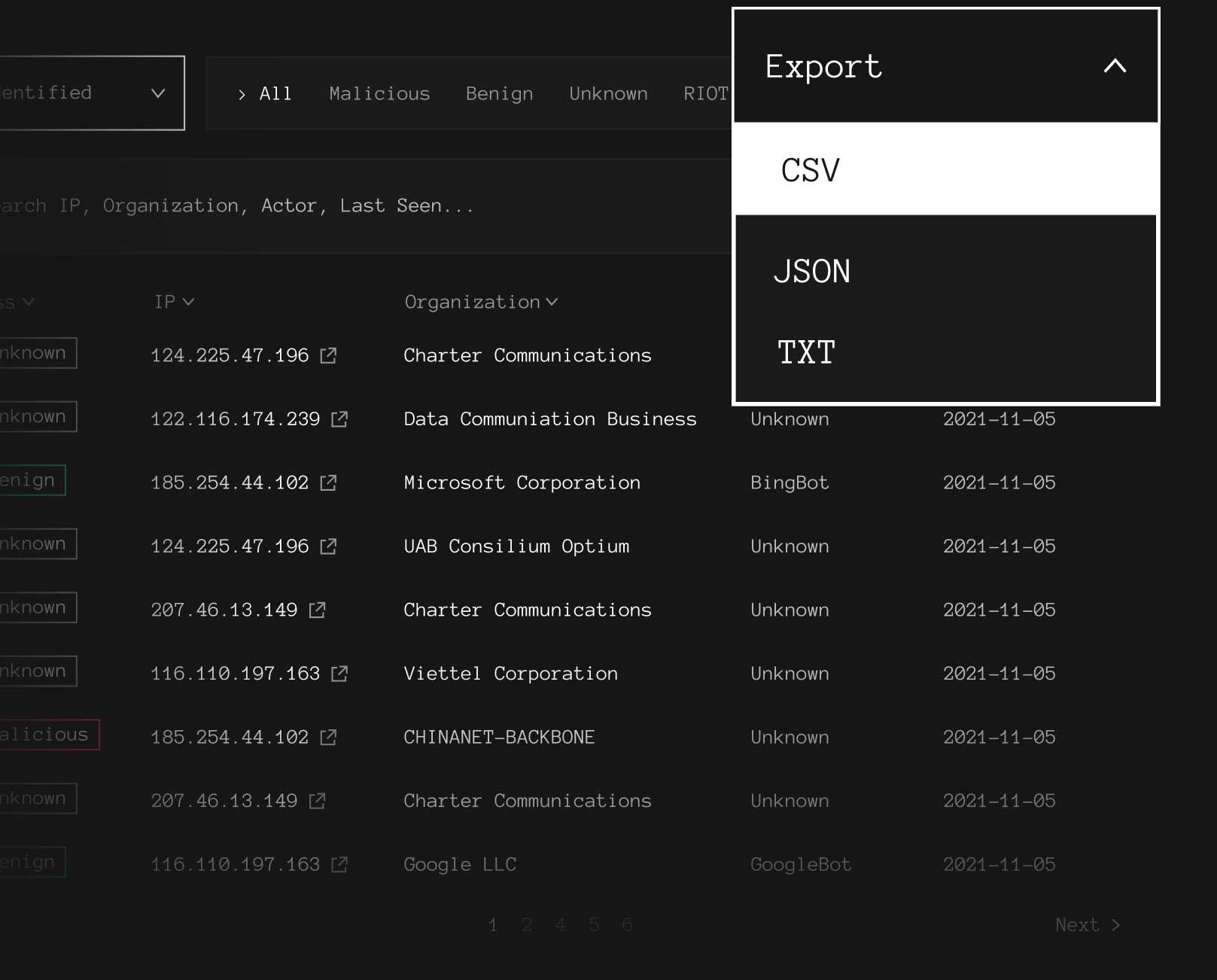 HURRICANE LABS
"GreyNoise has allowed us to reduce the volume of alerts that are triggered by 25%."

SECULORE
"Our analysts are saving 8 hours a week each with GreyNoise."